I came across this thoughtful report in Spiny Trends, the publishing platform for digital media companies. It predicted, as have many other sources, an economic slowdown next year, and therefore an advertising recession.

Ad recessions are no fun. Budgets are blown up. Bosses become belligerent.  Advertising customers disappear, sometimes never to return. But, this report argues, an economic slowdown should not trigger an ad slowdown. On the contrary, advertisers who kept their spend consistent, were more likely to emerge stronger. And publishers, the report said, should do their part to point out the benefits of maintaining spending. 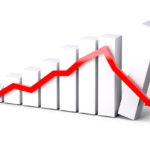 The report, by the journalist Peter Houston, cited a Guardian article predicting that the $850 billion global ad market is facing a car-crash year in 2023.

(Incidentally, I remember less than 12 months ago, when predictions were for steady advertising growth for the next several years.)

One thing is true: Ad budgets are the first to be cut in a recession. That said, they’re still a trailing indicator, both at the start of recession and when emerging on the other side.

But here’s what happens when marketers stop advertising in a recession. Houston referred to a study in 2021 that found stopping advertising produced this catastrophic cascading effect on sales, with sales down:

And on the other side of the coin, the research firm WARC cited a 2008 study that showed those that maintained or increased ad spending during recession saw much greater marketshare gains than those that decreased spending.

This is not a new argument. It’s been repeated many times, based on many research studies, but it’s one thing when research firms present findings, and it’s another when a marketer is facing a 20% decline in revenue. What are you going to cut—ad spend or employees?

Still, the data is the data, and it’s something for advertising sales professionals to present to their clients.