At the Chicago Dental Society, A Veteran Journalist Reflects On His Career

Will Conkis, a newspaper reporter and editor turned publishing director at the venerable Chicago Dental Society, has spent the last 20 years in charge of the society’s news-gathering operation. To be sure, he’s just the most recent head of publications in the organization’s 158-year history, but he’s got a razor-sharp sense of the mission.

“The purpose of the CDS is to promote the good public oral health of the public through aiding dentistry and serving its needs as well as we can,” he says. “When the COVID pandemic broke out, for example, organized dentistry like the CDS was helping everyone find out what they needed to do to make their practices as safe as possible.” 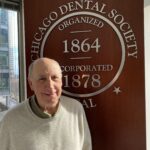 Not bad for someone who spent a career prior to the CDS working in general news. Conkis’ career as a journalist goes back to when he finished college. “I started in the newspaper business on the staff of the Peoria Journal Star. I worked the night side. I started at 3:00 a.m. and worked till 11:00 a.m.”

Now, after winning 29 awards for journalistic excellence from various organizations, and spending two decades producing the 7,900-circulation CDS Review Magazine—managing both the editorial and advertising sides of the operation—Conkis is retiring.

Conkis has been a longtime partner of Fox Associates, so we at Fox Tales thought it would be appropriate to ask for his perspective on a career in association publishing. We sat down with him recently has he reflected on his career. Here are excerpts from that conversation.

Fox Tales: Tell us how you got started in the business.

Will Conkis: After the Peoria Journal Star, I was with a group called the Life Newspapers in the western suburbs: Berwyn, Cicero, Western Cook County. I was with them for a long time.

Fox Tales: Tell us about the Chicago Dental Society.

Conkis: The society was organized in 1864 and incorporated in 1878. Initially, it was dentists exchanging information among themselves. That’s how the annual mid-winter meeting started. They were sharing scientific papers, and delivering them at the meeting. That went on to become the mid-winter meeting, and now it’s been around more than 150 years.

Now, we have 6,000 members. Our services include providing continuing education so doctors can stay up with the latest information about dentistry procedures, instruments that help them serve patients, and issues that need to be addressed. Education is one of the big things. Dentists have to prove to the government that they are keeping up with their education.

Fox Tales: As the director of publications, what’s the scope of your work?

Conkis: I’m responsible for overseeing the publications department that creates the CDS Review, which is published on a seven-times schedule. I work with the graphic end of it, I work with our writers and our outside contributors. I’m also responsible for such things as budgets, spending, and bringing in revenue through advertising. I’m the advertising manager. Being the director of publications, print and digital, has been one of the most interesting positions I have held in my career.

Fox Tales: Tell us about that career trajectory. How does a foundation in journalism influence you in your broader role?

Conkis: Well, I do the role now the same way as when I was at a newspaper, or when I was a managing editor. We don’t do anything unless it’s related to dentistry. The news that we do is designed to be an aid to members. And we do feature stories. Dentists have outside interests. Some paint, some are in bands—they have a large range of interests. Our bottom line is: Is it interesting? That’s the number-one thing you consider when you do a story.

Fox Tales: How was the transition to being a hands-on advertising manager?

Conkis: It’s always been part of what I have done, certainly once I moved into management. You have to work with the advertising department and understand what’s going on.

In our case here at CDS, Fox Associates takes care of the advertisers. They’ve done very well, therefore I don’t get too involved.

Also, much of what’s done when it comes to the ads is done by our customers—the advertisers. If they need help, they’ll go to their ad rep at Fox, and the rep will figure out how to help them. Designing their ads, for instance, or some other thing they need, we provide it to them.

Conkis: We discuss what the rates are, we decide what we’re going to be doing—and I do the budgeting from CDS’s position. We talk about what we can expect will come in, and a budget for sales, and then Fox handles all of that. If there are issues, I talk with [Fox EVP and COO] Steve Schwanz. I find Fox to be very helpful, they’re very much informed. I accept their advice, easily, because it’s sound advice. It’s not pie in the sky. It’s solid information. It’s not just what the customer wants to hear, it’s what’s going on out there. I like their system. It allows us to have a broader source of ad revenue that way.

I consider them to be part of the department—they are to me.

Conkis: I’m just going to retire. Right now I’m not sure I want to do any freelancing or anything like that. I’ve been doing this for 52 years. It’s at a point where maybe I should step back a little bit and take a deep breath.

I’ll probably spend a lot of time playing golf. I play every weekend starting in March, and I’d still be playing now. As long as there’s not snow on the ground. I also think my wife is looking forward to seeing me once in a while.