Vince Backley, an 18-year veteran of Fox Associates and longtime mentor to the team, died in December, the company announced.

CEO Marlys Fox brought Vince to the company in May 2004. He’d also been her beloved husband for the last 16 years.

Here’s what Marlys said to her management team at the time Vince was recruited: “Here is the resume of the consultant I have hired for our company. You’ll see that it is well-rounded and very impressive. Most importantly to me is that I have known Vince for almost as many years as some of you are old, and I know him as well as I’ve ever known anybody. Needless to say, I trust him implicitly in every sense, and I have very high regard for his business acumen.” 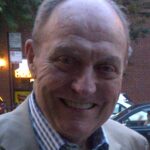 From the moment Vince arrived on the Fox Associates scene, his experience and knowledge contributed in impactful ways  to all aspects of the business, especially in developing the further professionalism of the sales and sales-support teams.

Vince had owned and operated his own advertising agency earlier in his career and because of that, he brought to Fox the unique perspective of having successfully navigated all sides of the advertising industry.

Vince was a gifted writer, serving as a revered coach to frontline sellers, support staff and even the interns as he imparted the ways of skilled and persuasive communication. His talent for effective editing for both meaning and brevity in writing will continue to serve all at Fox Associates into the organization’s future.

Vince was an equally gifted storyteller, and often kept all of ‘the Foxes’ in stitches during conference calls and sales meetings.

Vince was a Chicago boy. He was born in the city and lived there until he moved to Cincinnati in 1970. There he worked at the Fahlgren Martin Advertising Agency for 22 years, ultimately becoming vice chairman and director. Later he started his own ad agency, Backley & Gingrich, in 1992, and serving there until 1999. Even though he was ‘the other side of the desk’ from what Fox does, he made the transition easily. “We are missing him greatly,” Marlys Fox said.

Vince had a BS/BA degree from Xavier University and an MBA from Northwestern University.

Vince was cremated and is in a beautiful wooden urn, resting peacefully with Marlys at home. The urn was made from restored wood that came from wine and whiskey barrels—labeled “The Vintner.” Those who knew Vince know that he would be very happy to spend eternity in that setting.